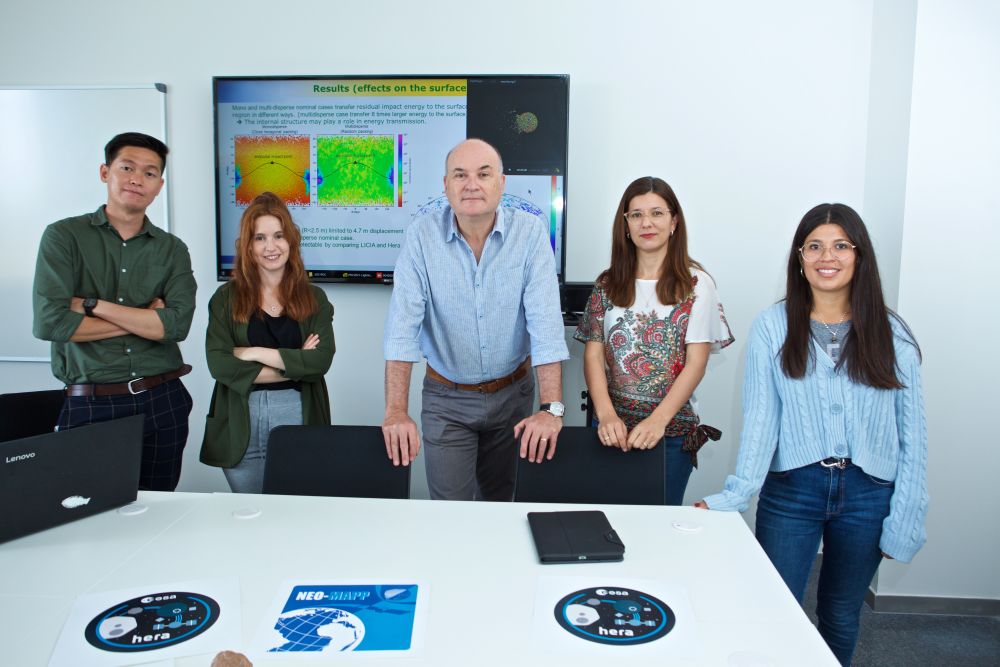 The scientific community has become aware of the need to measure the current technological capacity to avoid asteroid collisions with the Earth and to search for protective devices against this potential risk in recent decades. In this sense, the goal of NEO-MAPP is to make significant progress in our understanding of how an asteroid responds when it is hit by a spacecraft launched at high speed, which would be a kinetic impact, and also how an asteroid responds to a close flyby of a planet.

For this purpose, the University of Alicante (UA) is once again participating in a project on advanced research on near-Earth objects (NEOs) and new technologies for planetary defence that will run up to 2023. The University of Alicante is indeed part of the fifteen European institutions taking part in NEO-MAPP and, to be precise, on its Work Package nr.5, the one that concentrates on the physical modelling of asteroids.

The goal is also to determine what instrumentation is needed on board a spacecraft to be able to fully determine all the physical, morphological and geological features of an asteroid subject to a provoked kinetic impact.

As a reference asteroid for most of the studies, the scientific use the binary system Didymos (twins, in Greek), formed by a primary asteroid of the same name, about 800 metres in size, and its satellite called Dimorphos (dual shape, in Greek), barely 160 metres. In terms of research into how an asteroid responds to a close flyby of a planet, Apophis will be used, which will come within just 31,600 kilometres of the Earth’s surface on 13 April 2029, i.e. beyond the orbit of geostationary satellites.

On that date, they will try to find out whether and how Apophis – which is about 300 metres in size and is not expected to collide with the Earth for at least a century, according to the latest observations – will be deformed by its close passage through the atmosphere.

The context in which NEO-MAPP is being developed is closely related to two previously announced space missions: DART, from NASA, and Hera, from the European Space Agency (ESA), which, although separate, are part of the AIDA (Asteroid Impact & Deflection Assessment) space cooperation to deflect asteroids that may collide with the Earth. Both missions are targeting the Didymos binary system at its closest approach to Earth in 2022.

The DART spacecraft, weighing more than 600 kilos, has been launched in November 2021 to crash into the surface of the smaller of the double asteroid system (Dimorphos) at a speed of 6.6 kilometres per second at the end of September 2022, with the aim of causing a crater and slightly modifying its orbit around the primary object. Four years and three months later, in December 2026, the European probe Hera is scheduled to arrive in the binary system to fully study the effects of the DART collision and fully characterize the system. NEO-MAPP is involved in this phase, as one of its main goals will be to unravel the internal structure of Dimorphos and, if possible, of the primary asteroid. In addition, another related task will be how these binary objects have been formed, as this is currently unknown.

We will have the chance to meet this wonderful team at the next Hera Workshop week, early summer in Nice, France.

This article has been hugely inspired by this one: https://mednight.eu/project/neo-mapp/