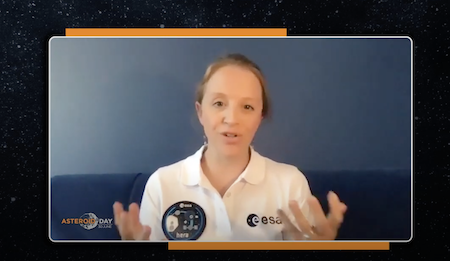 As part of Asteroid Day LIVE 2020, members of the NEO-MAPP project took time out to talk about  developing instruments, technologies and data exploitation techniques for future spacecraft missions to asteroids. NEO-MAPP on Asteroid Day LIVE 2020 includes discussion of seismology stations to be dropped on asteroids, ground-based observing campaigns to support asteroid missions, and the best way to combine data sets to extract the maximum knowledge about asteroids.

The NEO-MAPP project is driven by the growing interest in near-earth objects (NEOs) with many scientific communities now intent on learning more about these smaller celestial objects. Interest ranges from the science that can be learnt from asteroids, to the resources they may one day provide, to the need for planetary defence.

Despite this wide variety of reasons, all communities share common needs. For example, they all need spacecraft to work in close proximity to NEOs and this means that they will all need similar levels of scientific and technical knowledge to succeed. Teams will also need the ability to model the properties of NEOs to fully plan their mission operations.

The Near Earth Object Modelling and Payloads for Protection (NEO-MAPP) project is addressing these commonalities. It is funded by the European Union’s Horizon 2020 research and innovation programme.

Hera will be humanity’s first visit to a double asteroid, the Didymos binary system. First, NASA will crash its DART spacecraft into the smaller asteroid – known as Didymoon – before Hera arrives to map the resulting impact crater and measure the asteroid’s mass.

It is NEO-MAPP’s job to ensure that the instruments, systems and techniques developed for Hera can then be widely used on successive asteroid missions. One innovation in particular are the asteroid seismometers that are being developed at ISAE-SUPAERO, Toulouse, France, as part of the project. They will be used in future to understand what causes the landslides and the crater erosion that has been observed on a number of craters.

The project is also studying the way ground-based observatories can support spacecraft missions to asteroids, and how to most effectively combine different datasets to extract the most knowledge from our asteroid investigations.