By studying small impact craters on the surface of the near-Earth asteroid Bennu, a team of researchers led by Ron Ballouz, University of Arizona, and including NEO-MAPP’s Patrick Michel, CNRS/Université Côte d’Azur/Observatoire de la Côte d’Azur, Nice, France, has uncovered the asteroid’s storied past.

The work has revealed that despite forming hundreds of millions of years ago, Bennu only wandered into Earth’s neighbourhood recently in astronomical terms.

The study has been published in the journal Nature and provides a new benchmark for understanding the evolution of asteroids, and enhances scientists’ understanding of the solar system. It also offers insights into a poorly understood population of ‘space rocks’ that poses a hazard to spacecraft, while also providing us crucial scientific information on the history of our Solar System and our planet.

Although Earth is being pelted with more than 100 tonnes of space debris each day, most of it burns up in our atmosphere. Planetary bodies lacking such a protective layer, however, bear the full brunt of this perpetual cosmic barrage.

The high-resolution images taken by OSIRIS-REx during a two-year survey allowed Ron Ballouz and his team to identify even tiny craters, with diameters ranging from a centimetre to a metre, on Bennu’s boulders.

On average, the team found that boulders of 1 meter (3 feet) or larger displayed anything from one to 60 impact pits – created by space debris called micrometeorites ranging in size from a few millimetres to tens of centimetres.

“I was surprised to see these features on the surface of Bennu,” said the paper’s lead author, Ron Ballouz, in a press release from University of Arizona about the findings. “The rocks tell their history through the craters they accumulated over time. We haven’t observed anything like this since astronauts walked on the moon.” 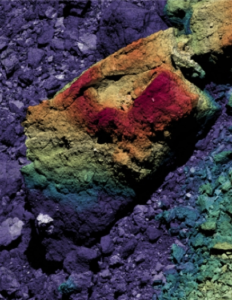 This composite image of a boulder on Bennu’s surface shows the cascading rim of one of the asteroid’s ancient craters that originated while Bennu resided in the asteroid belt. The image combines photos from OSIRIS-REx and reconstructed shape models built from the OSIRIS-REx laser altimeter instrument. The overlaid colours highlight the topography of the boulder (warmer colours are higher elevation). Credit: University of Arizona/Johns Hopkins APL/York University.

The crater distribution found on Bennu today keeps a historical record of the frequency, size and velocity of impact events the asteroid has experienced throughout its history. Analysing the observed distribution on boulders on the surface of Bennu, the researchers were able to make inferences about the sizes and type of impactors to which the boulders were exposed, and for how long.

The authors conclude that the largest craters on Bennu’s boulders were created while it resided in the asteroid belt. Here, impact speeds are lower than in the near-Earth environment, but impacts themselves are more frequent, and often near the limit of what the boulders could withstand before breaking.

Smaller craters, on the other hand, were acquired more recently, during Bennu’s time in near-Earth space, where impact speeds are higher but potentially disruptive impactors are much less common.

Based on these calculations, the authors determine that Bennu is a relative newcomer to Earth’s neighbourhood. Although it is thought to have formed in the main asteroid belt more than 100 million years ago, the researchers estimate that it was kicked out of the asteroid belt and migrated to its current region only 1.75 million years ago.

While theoretical models suggest that the asteroid belt is expected to be the starting point for near-Earth objects, this is some of the first observational evidence to back up the idea.

The impact data also gives researchers an idea of how strong and solid these objects are. “We need this kind of evidence and studies to derive the mechanical properties and response of asteroids,” says Patrick. This is crucial information for any future missions that plan on targeting asteroids for research, resource utilisation or planetary defence.