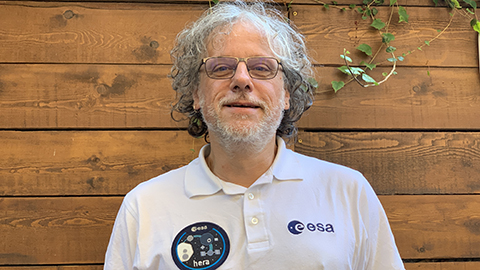 One of the greatest medical advances of the 20th century was the ability to see inside the human body with X-rays. Now, something similar is happening in the field of asteroid investigations.

Alain Herique of the Institut de Planétologie et d’Astrophysique de Grenoble and associate professor at Université de Grenoble Alpes, France, is pioneering the use of radar to see inside asteroids and other minor bodies of the Solar System, such as comets.

Alain began his career with geophysical prospecting when using the techniques to look for archeological remains on Earth. He soon turned his attention to space, however, when he was offered a PhD working on the development of a radar instrument for a Mars mission. In the process of this work he developed a joint expertise in radar and planetary science.

Although that original mission never flew into space, the expertise he developed allowed him to take on a big challenge: Instrument Scientist and later Principal Investigator for the radar on ESA’s ambitious Rosetta mission.

Rosetta was not going to orbit a planet, instead it was to visit and land on a comet. One part of the radar instrument would be on the lander, the other on the orbiting spacecraft. The lander would transmit radio waves through the comet that the radar on the spacecraft would pick up – effectively building up a ‘cut through’ view of the inside of the comet. The instrument to do this was called COmet Nucleus Sounding Experiment by Radio wave Transmission (CONCERT). 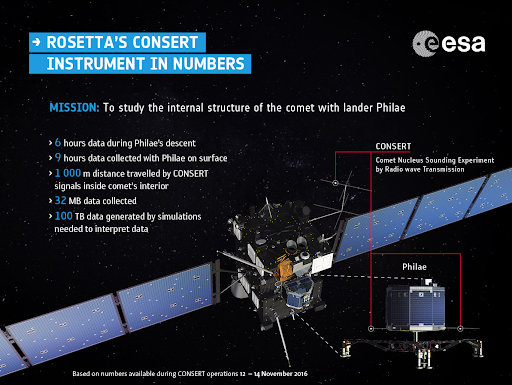 When designing a radar, there are some crucial differences between one to measure a planet and another to measure an asteroid or comet. With a planet, the spacecraft is hundreds of kilometres above the surface, orbiting at several kilometres per second.

Around a minor body, however, things are more sedate because the gravitational field is much weaker. Orbital speeds can be more like walking speed, just a few metres per second, and the spacecraft can be a lot nearer the surface. This means that the radar does not need to have as much power, and so can be designed in a more compact way.

“Typically, we try to have the instrument as small as possible,” says Alain. In this way, a low power instrument can be more easily included in a payload than something that would require more mass and use a lot of the available power on the spacecraft.

Radars for small missions are increasingly being realised to be a vital component for any mission to a minor body because the interior structure of the body reveals a lot about its history. Take the asteroid Didymos and its moonlet Dimorphos, which are the destinations for ESA’s Hera mission.

About fifteen percent of asteroids are binary systems, meaning that they possess smaller moons. However, when astronomers run computer simulations to try to understand how those moons are formed they find it very difficult to achieve such a large fraction if these small moons are originally floating through space and are then captured by the larger asteroids.

Today, the accepted – and more spectacular – scenario is that the binary asteroids form when an original body is smashed in a collision and then gravitationally re-accumulates as an aggregate of debris, sometimes called a rubble pile.

“The large fraction of binary systems is indirect evidence that these bodies are aggregate structures,” says Alain. This is because the re-accumulated asteroid can then be subjected to various different processes that pull it apart and create a binary system.

To test these various hypotheses, Alain and his team are designing the smallest radar ever to be flown in space. Called JuRa, it will be placed on a small CubeSat called Juventas, which will detach from the main Hera spacecraft when it nears the target. 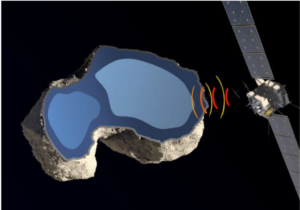 The low frequency radar JuRa will provide the first direct probing of an asteroid subsurface and internal structures. Credit: ESA

It will use radar to peer inside the binary pair to determine whether they are solid monolithic blocks of rock, or rubble pile aggregates. This information would also be vital to know if we needed to deflect an asteroid because a monolithic asteroid would behave differently to being hit than an aggregate body.

“The direct observation of the internal structure of the two bodies will allow us to better understand and then better model the formation and stability of conditions of such a binary system,” says Alain.

Thanks to the work of Alain and his colleagues, it has now become clear that radar can add a huge amount to the overall analysis of a celestial body, especially asteroids.

One of its greatest powers is when the radar data is combined with information about the asteroid’s gravity field, given by the spacecraft’s orbit around the body. In the future, data from seismometers on the surface of an asteroid will also provide complimentary information.

Indeed, this is one of the goals of the NEO-MAPP project to develop the computer models and analysis tools that will allow all of this different information to be brought together, and mined for the knowledge it contains.

“I think studies of the internal structure of asteroids is the future for these kinds of missions,” says Alain, “I’m sure the next generation of missions are going to embed high resolution radar instruments in their payload. That’s one of my goals.”

Taken together, two things are clear. Firstly, radar is now an almost essential component of any science mission. Secondly, Alain and his team are going to be very busy indeed.