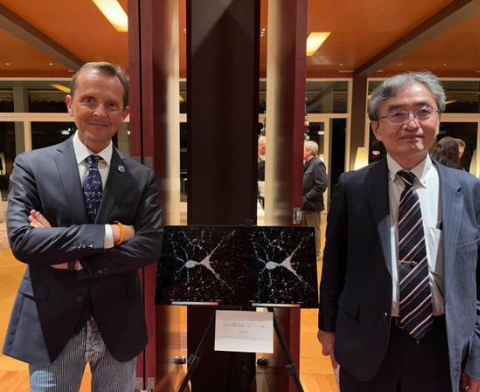 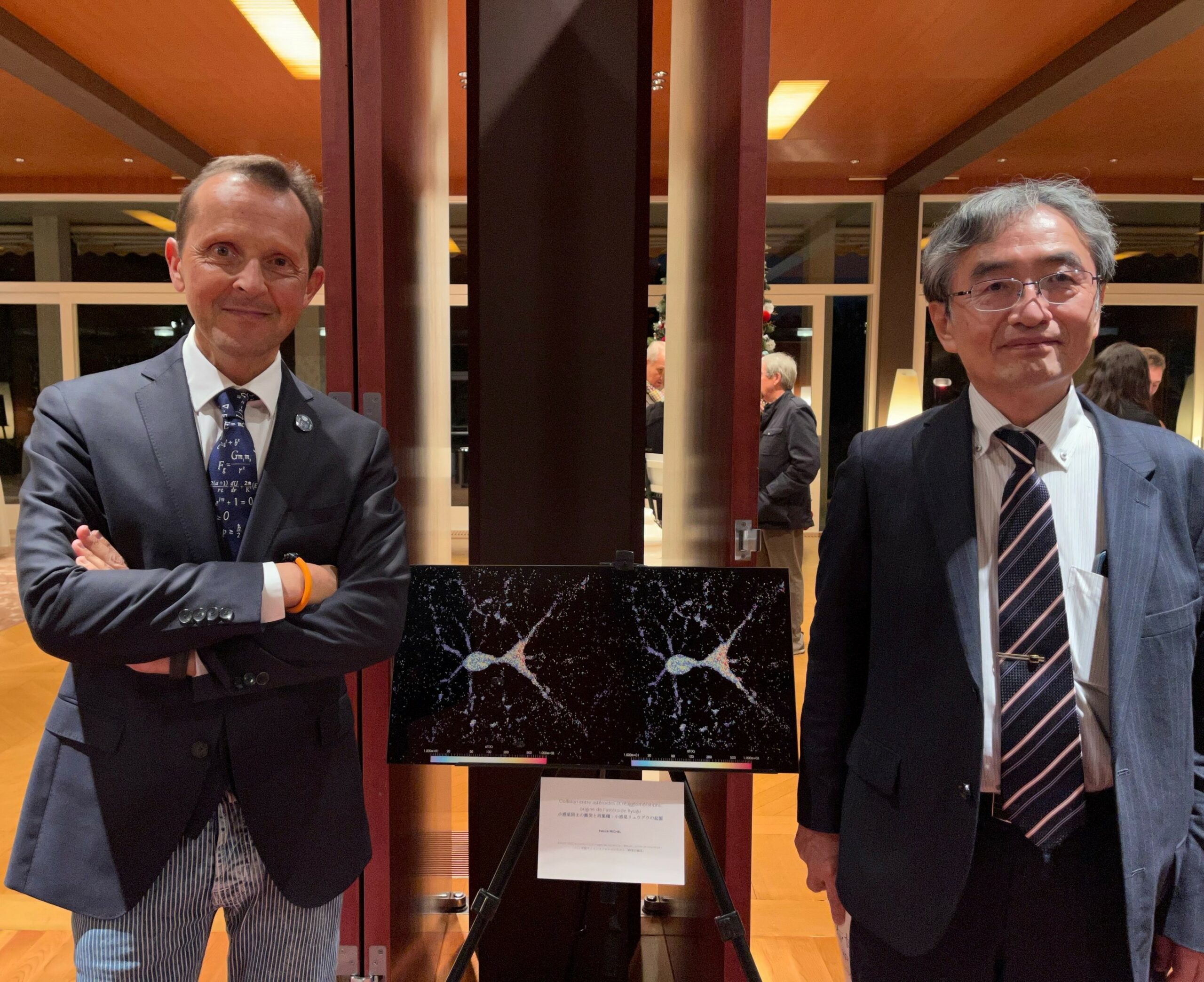 Dr. Patrick Michel, coordinator of the NEO-MAPP Project, thanks His Excellency Mr. Philippe Setton, Ambassador of France to Japan, for his warm welcome and for listening attentively to recent advances and future challenges in the field of planetary defence.
Following a major Franco-Japanese competition organised by the Embassy, the image submitted by our Project was ranked among the twelve finalists, among more than fifty participants.

What was the process of obtaining our image?

In order to obtain a completely original image, two images were first extracted from a numerical simulation of asteroid destruction by collision, potentially giving rise to the asteroids Ryugu and Bennu, visited by the JAXA Hayabusa2 and NASA OSIRIS-REx probes. In fact, during such a collision, the initial asteroid, which is 100 km in size, is first pulverised into very small fragments of less than a hundred metres in size. These fragments then interact under their own attraction and can re-agglomerate to form aggregate asteroids such as Ryugu and Bennu, which shapes can also resemble the spinning tops of the two asteroids. The results were previously published in the peer-reviewed scientific journal Nature Communications, in a paper written by three members of our Project, Dr. Patrick Michel as first author, Prof. Makoto Yoshikawa and Dr. Brian May, among other asteroid specialists. The latter two are on the NEO-MAPP Advisory Board. Moreover, Prof. Yoshikawa of JAXA is the renowned Mission Manager of Hayabusa2 and Sir Brian H. May is the famous guitarist of the rock band Queen. These two images were therefore carefully and precisely extracted by Ms Claudia Manzoni (a leading stereoscopy specialist) together with Sir Brian May, in order to obtain the most perfect pair of stereoscopic images, viewable in three dimensions through a special pair of glasses. The three-dimensional view allows us to see details of the re-agglomeration process that causes small asteroids that are not accessible in two dimensions. This last pair of images was selected from the 12 finalists of the competition and presented to His Excellency by Patrick Michel, Makoto Yoshikawa and Julien Serrecourt (Project communication officer) at the competition awards ceremony.

What is the Hayabusa2 (JAXA) mission?

Hayabusa 2 (Japanese for “Peregrine Falcon 2”) is a space mission of JAXA, the Japanese space exploration agency. Launched on 3 December 2014, this space probe weighing just over 600 kilograms, powered by four ion engines, reached the asteroid (162173) Ryugu before studying it between June 2018 and November 2019. During its stay, the spacecraft dropped off several small devices on the ground, which collected data in situ using several onboard instruments. Hayabusa 2 took soil samples twice (5.4 grams in total, instead of the expected 100 milligrams) which were brought back to Earth and are currently being analysed. The capsule containing them had previously landed in the Woomera desert region of Australia on 5 December 2020.

This mission follows on from Hayabusa, launched in 2003. The latter, despite numerous setbacks, succeeded in bringing back a small amount of soil from an asteroid. The main technical characteristics of Hayabusa 2 are identical to those of its predecessor. The spacecraft is relatively small in size and has cameras, an altimeter and several spectrometers. It differs from its predecessor in the method of collecting samples and carrying a small MASCOT lander provided by the German (DLR) and French (CNES) space agencies, in an improved version of the ion engines and in an impact experiment to produce an artificial crater on the asteroid’s surface. The asteroid studied is of C-type, i.e. likely to contain organic material and hydrated minerals.

Hayabusa 2 is the second mission after Hayabusa to successfully return samples from an asteroid to Earth. It has been extraordinarily successful in all its risky operations. The data collected in situ have already allowed us to take a giant step forward in our understanding of the properties of asteroids, linked to the formation and evolution of the Solar System, and have provided the constraints necessary for the numerical modelling of the formation of Ryugu at the origin of the stereoscopic pair selected by the French Embassy. Moreover, the probe brought back a much larger amount of sample (5.4 grams) than the one targeted (100 milligrams), and the preliminary analyses have already produced very important new knowledge, confirming in particular the link between Ryugu and the most primitive meteorites we have in our collection, which has many implications.

JAXA recently decided to extend the Hayabusa 2 mission with a second objective: the study of the asteroid (1998) KY26, which belongs to a category never before visited by a space probe. It is a small (30 metres) and rapidly rotating asteroid (one rotation every 10 minutes). The space probe is due to reach it in July 2031, after more than 10 years of transit, including a flyby in 2026 of another type of asteroid.

Our European project NEO-MAPP is focused on Planetary Defence, and more precisely on the numerical modelling of the impact process, the dynamic and structural properties of asteroids and on the space instrumentation and the development of new tools for the analysis of the data obtained by these instruments. The reference mission of the project is the Hera mission of the European Space Agency (ESA), whose Principal Investigator, Patrick Michel, is also the coordinator of the NEO-MAPP project, which also includes most of the members of the Hera scientific team. It is supported by the European Commission through its Horizon 2020 programme (Grant Agreement nbr. 870377).