The NEO-MAPP mid-term review has taken place successfully with some team members gathering at the Côte d’Azur in Nice, France, and others joining digitally to discuss the progress of their work.

NEO-MAPP stands for Near Earth Object Modelling and Payloads for Protection, and has two key goals. The first is to mature or adapt existing computer models that relate to asteroids so that the codes can be used in planetary defence applications. The second is to develop new instruments and technologies to supply more data, and find better ways of extracting more information from them.

“The review showed an impressive amount of advances in all the activities of the project since its beginning. These advances contribute substantially to planetary defense efforts and support the development and data interpretation of the Hera and DART missions. I was particularly delighted to observe the great motivation and efforts of all team members, in particular the young researchers recruited on the project funds.” says Patrick Michel, Université Côte d’Azur and the NEO-MAPP Lead Project Coordinator.

It is a fascinating time for planetary defence. NASA is in final preparations for launching the DART mission on 24 November. This fridge-sized spacecraft will collide with the 160-metre asteroid Dimorphos to try to change its orbital velocity by around 0.4mm/s. The DART mission is a test, but one day such a tiny velocity change could be enough to save Earth from a catastrophic asteroid collision.

To determine the success of DART, the European Space Agency is launching the Hera mission in 2024. Arriving at Dimorphos in 2026 it will inspect the impact crater and characterise the asteroid so that the full effects of the crash can be determined, and this is where NEO-MAPP comes in. Much of the project’s work is directly designed to help with the Hera mission, developing computer modelling techniques and instrumentation for the mission. 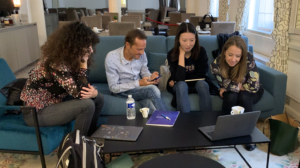 Yun Zhang, Université Côte d’Azur, is a specialist in the computer modelling of asteroids’ internal structures. In particular her work can predict what size and shape of crater can be created following an impact. Since this is a key component of planetary defence, her work has direct relevance to the DART mission. “We would like to practice how to deflect asteroids in a computer first,” she says.

The details of such impact come down to how the asteroid’s rocks fragment and distribute the energy of the colliding spacecraft. This is the expertise of Martin Jutzi and Sabina Raducan, University of Bern, Switzerland. The University is home to a computer code that specifically models such rock fragmentation. Called the Bern Smoothed Particle Hydrodynamics (SPH) code, it is one of a pair of codes, the other having been developed in London and Berlin, that simulates rock fragmentation due to impacts.

These two codes each take a different approach to modelling the break up of rocks, and so they are invaluable cross-checks on each other. Because the physics is the same, both models should give consistent results.

Other members of NEO-MAPP are concentrating on instrumentation. Alain Herique, Grenoble University, France, has participated in many missions, working on instruments like radars that can probe the internal structure of celestial bodies. He is now working on a radar system to fly on Hera mission to probe the internal structure of Dimorphos. Not only will it allow the effects of the DART impact to be better understood, it will also provide crucial information for understanding how the moon formed in the first place.

Once the new data is collected, however, scientists must then make sense of it all. Jean-Baptiste Vincent, DLR Institute for Planetary Research, Berlin, is developing new ways of combining data from several instruments to extract richer details about the shape of a target asteroid than single instruments are capable of providing. 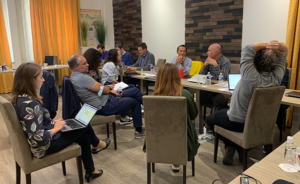 With Hera, for example, data from the camera, the laser altimeter instrument and the radar will all be available. “We are taking the knowledge we have gained from the NEO-MAPP project and applying it to Hera to design better trajectories for the spacecraft and better ways to acquire the data to maximise the science return of the mission,” says Jean-Baptiste.

“One thing we try to do with NEO-MAPP is to have a multi instrument approach so that we can check for consistency between the results and increase the robustness of our conclusions,” says Patrick, who also serves as the principal investigator for the Hera mission.

As the review proved, the work is on course and progressing well. During the last two years, the teams’ work has been presented in contributions to over 30 peer reviewed papers, 20 conference presentations, 2 conference proceedings.

“The dedication of this team is so impressive, they fuse years of expertise with enthusiasm; no wonder they’re making such good progress,” says Colleen Fiaschetti, Asteroid Foundation Programme Director.

The NEO-MAPP project is funded by the European Union’s Horizon 2020 research and innovation programme.

Meet the team and learn more about the project by watching the video below!