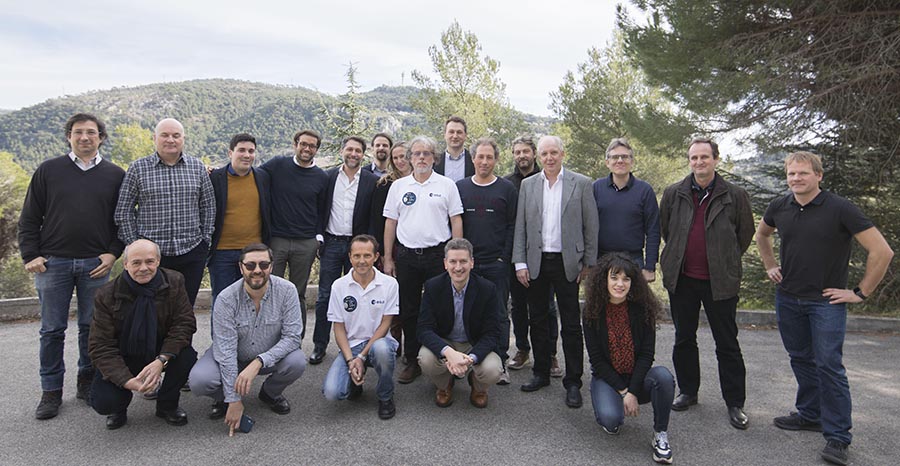 The NEO-MAPP project was born in response to the European Commission’s call in the framework of its Horizon 2020 program to fund organisations pursuing asteroid deflection techniques, or other studies relevant to preventing an impact with the Earth.

At the time, Patrick Michel, Director of Research at CNRS at the Observatoire de la Côte d’Azur in Nice, France, and colleagues were working hard to complete their preparatory study of ESA’s Hera mission. Hera was a proposal for a mission to study the Didymos binary asteroid system to understand the full effects of a deflection test that NASA plan to launch in 2021 with a mission called DART.

The team were racing to complete their work on Hera so that it could be presented at the ESA Council at Ministerial Level called Space19+ in Seville, Spain, in November 2019 for approval or rejection. The team realised that there was a lot more to study than just the techniques and equipment that were specific to the Hera mission. They also wanted to develop new ways of investigating asteroids for future missions.

So the group brought in some other key personnel from European industry and formed NEO-MAPP, with Patrick, who is also the Principal Investigator of Hera, as the Principal Investigator of the Consortium. NEO-MAPP stands for Near Earth Object Modelling And Payload for Protection. It is a comprehensive project that focuses on understanding asteroids, their exploration by space missions and the ways that we may protect ourselves from them.

The European Commission has a long standing interest in studying asteroids from a planetary defence perspective. From 2012-2016, it funded NEOShield and NEOShield-2, which brought together international groups of scientists and engineers to investigate methods of defence against asteroids.

NEO-MAPP is an obvious extension to this work, as it will built on the expertise gained with those previous efforts, drive progress in those areas that are already being investigated, and begin to explore new areas of research too. The project won funding from the European Commission, and began operations in February 2020 with a kick-off meeting in Nice, France. Hera also won its funding from the ESA Member States, and so has become the reference mission for NEOMAPP.

“NEO-MAPP has the goal of supporting the development of Hera while also planning for the future. So, we are also developing some new modelling, instrumentations and other activities that are not directly relevant for Hera but that can be used for future missions to small bodies,  whether their goal is focused on planetary defence, science or mining,” says Patrick.

This approach reflects the fact that multiple communities are now interested in asteroids and other near-Earth objects for a variety of reasons, including using their natural resources for commercial benefit. Yet regardless of the objective, all share common scientific and technological requirements.

There are two main objectives for NEO-MAPP. The first relates to numerical modelling using computers, and is to be able to understand better the response of an asteroid to an external force. This could be its response to a collision of some sort, such as the one that DART will perform to test the ‘kinetic impactor’ deflection technique, or just the way the asteroid responds to the changing force of gravity it experiences as it makes a close pass to Earth. Both of these events have the potential to change an asteroid’s orbit and its physical properties.

In the case of the impact, this is clearly related to planetary defence because it is the principal way that astronomers will try to nudge an asteroid onto a safe orbit. When it comes to understanding better the way asteroids respond to close flybys of the Earth and other planets, this too helps planetary defence as we will better be able to predict the future path of asteroids. Researchers can also derive information about the asteroid’s physical properties because of the way the encounter affects the asteroid’s shape, or causes surface or internal motions.

The second main objective is to develop new instruments that are optimised for space missions to asteroids, and to develop a multi-instrument approach to the subsequent analyseis, so that the knowledge gained benefits from multiple data sources. For example, NEO-MAPP is developing a micro-laser altimeter to measure the height of the spacecraft above an asteroids’ rugged surface. The data produced can be combined with images of the asteroid to precisely determine the asteroid’s shape. The shape can be combined with an analysis of the spacecraft’s trajectory to give the mass of the asteroid, which leads to the bulk density, which is in turn an indicator of the asteroid’s porosity, ie whether there are voids inside its bulk.

Other examples of innovative instruments that will be developed are a high frequency radar that can probe beneath an asteroid’s surface, and seismometers that can be placed on asteroids and, by measuring the way seismic waves propagate within the asteroid as a result of external perturbations, investigate their internal structure.

When it comes to our knowledge of asteroids, we’ve come a long way in the last 30 years. In those three decades we have gone from just seeing the asteroids as points of light in a telescope to seeing them in close up with flybys and rendezvouses. Now we have missions like JAXA’s Hayabusa2 and NASA’s OSIRIS-REx, which have visited asteroids Ryugu and Bennu respectively in order to collect samples from their surfaces that will be analysed in laboratories on Earth.

While Hera is the next step, members of NEO-MAPP work on both Hayabusa2 and OSIRIS-REx also. “When we saw the first images of Ryugu and Bennu, we felt like explorers, you know, seeing new territories, totally new worlds, and, again, big surprises,” says Patrick.

And these unforgettable experiences are an inspiration for NEO-MAPP to succeed in bringing more ‘new worlds’’ into view so that others can be amazed and benefit from the new knowledge obtained from them.